The Dangers of Toy Unboxing Videos and Influencer Marketing To Kids

Unboxing videos are not new to the online content space. This genre of videos started with adults unboxing things like new phones, tablets and other technology, and has evolved over time. In the beginning, these videos featured content geared towards adults and were useful because they acted as real user reviews of popular products. Adults could watch these videos and determine whether or not they wanted to buy something for themselves.

Today, child influencers and their parents are using the same strategy to target kids with toy unboxing videos. These child influencers generate millions of dollars in revenue for both themselves and toy companies, while teaching children poor habits. The most well-known influencer, Ryan Kaji of Ryan Toys Review, generated $22 million in 2018, and has grown his YouTube channel into his own line of toys, clothing, and a tv show on Nickelodeon, all by the age of 9. From the outside, these videos from such influencers seem harmless and even fun, but they come at a price.

What are Toy Unboxing Videos?

Toy unboxing videos typically depict children receiving a new toy and taking it out of the packaging on camera, often times partaking in imaginary play afterwards. This type of content appeals to kids for many reasons, but foremost because of the on-camera reveal. Children get excited over the element of surprise they feel as they see the child on-screen take their new toy out of the packaging and play with it. This feeling of surprise and excitement has been exploited further by toy companies specifically designing toys and packaging meant to be featured in unboxing videos. L.O.L. Surprise Dolls are a great example of this, where every package is a surprise for the child and includes unknown dolls and accessories inside.

With toy unboxing videos, kids start to feel like they’re part of the fun, and even though they can’t necessarily play with a toy on their own, they’re excited to feel like they’re included by watching the child influencer play with it. These unboxing videos generally follow the same format in each upload, so a child knows exactly what to expect, and are usually less than five minutes to cater to short attention spans. Lastly, toy unboxing videos often feature characters from popular brands that further entice children to watch.

No ads, no toy unboxings and no influencers. Just quality videos for kids. 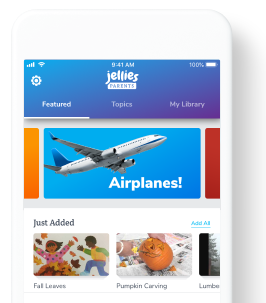 Why Toy Unboxing Videos Are Harmful

Unboxing videos may seem harmless to children on the surface, but this type of screen time can be detrimental to your child in underlying ways.

Many parents have faced this situation before. Their children watch a video on YouTube about a certain toy, and next thing you know, they’re begging for it over and over again. Of course, these effects may seem similar to a traditional TV commercial, but there are some key differences.

Commercials generally have about 30 seconds or less to convey their point and show off their product to a child, while a toy unboxing can in theory, last as long as a content creator wants. The unboxing videos also often associate getting new toys with feelings of happiness, joy and other positive emotions. This marketing tactic is pure manipulation and can lead to excessive concerns over popularity and “what’s cool.” When our children see these videos, they may ask questions like:

Children are easy targets and don’t realize that what they’re watching is an advertisement.

When children don’t realize they’re seeing an advertisement, there are some moral gray areas. Many platforms require sponsored content to be identified directly in a video by a host or by a text overlay, tag in the video description, etc. Toy unboxing videos generally do not abide by these guidelines even when something is truly sponsored, and content creators simply may not follow the rules regardless. In general on most platforms, there is a lax enforcement of these policies.

There is also the morality issue of parents putting their kids into videos solely with the intention of getting paid or benefiting monetarily from posting said videos. Like in the case of Ryan Toys Review, this small toy unboxing channel on YouTube led to a multi-million dollar company run by Ryan’s parents.

Lastly, for our kids, toy unboxings look like a standard fun video of people enjoying themselves. Our children stare in awe at the amazing toys these kids have without realizing the fact that at times, they didn’t buy any of them. Often, these content providers received the toys for free from advertising deals in exchange for the reviews and positive opinions provided in the unboxing video.

We’ve seen many situations where a video may appear as one thing through a thumbnail or preview and end up being something else completely on the other end. The thumbnail will look like a popular cartoon character video, but ends up containing violent content with coarse language featuring the same beloved character.

Even videos that are from popular children’s channels may still be harmful through teaching kids bad and unwanted behaviors. This may be done unintentionally, however in reality, kids may pick up things through toy unboxing and toy play videos such as violence, toy smashing, bad attitudes, back talk, bad language and more.

Lastly, much of this content also provides little-to-no value to children. It doesn’t teach them anything other than to admire and want more possessions and often can lead to lack of gratitude or thankfulness.

In general, many major platforms cannot regulate or personally check every single uploaded piece of content due to massive quantities that are uploaded on a daily basis.

How to Find Quality and Impactful Content for Your Kids

We created Jellies because we recognized there was a problem with the current state of content and the quality of screen time as outlined above. There is a lot of scary content out there, and we worry about what our kids consume and how they are influenced. At a young age, childrens’ minds are so impressionable, it’s critical to take every opportunity to fill them with happiness and positivity, while also helping them learn and explore the world through their own eyes and opinions.

Jellies never contains any ads, unboxings, or scary surprises. All of our content is 100% human-curated and vetted for safety and security. We keep all the child influencers out, so your kids get the best content possible.